The road goes home through dark, troubled yards, alleys and entrances? Or you are attacked by a mad dog, or maybe on the road you have to deal with an aggressive driver? A drunken neighbor threatens you with violence? No problem! The flashlight – stun gun POLICE 1101 will come to the rescue. He is instantly put on alert, and for a moment he immobilizes the enemy! Flashlight – stun gun is perfect for tourism, fishing, cottages and as an irreplaceable thing for motorists. This device is used as professional security services, as well as ordinary people who need daily protection.

In flashlight – stun gun the latest scientific achievements are applied, which made it possible to obtain the following functions: 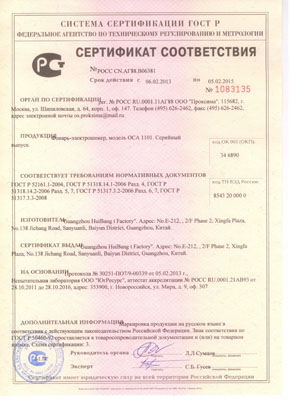 After purchase, the stun gun needs to be recharged within 8-10 hours. Charging should be done in the off state (the fuse must be set to “OFF”). A fully charged stun gun POLICE 1101 generates a powerful spark, the flashlight shines brightly. Reducing the brightness of the flashlight and the frequency of the breakdown of the spark indicates the need for recharging. Stun gun is equipped with a built-in rechargeable Ni-MH battery. Depending on the operating mode and operating conditions, the batteries provide from 300 to 600 discharge-charging cycles. This figure may decrease with increasing depth and discharge rate. Before you start the operation of new Ni-MH batteries, you should remember that they must first be “swung” for maximum capacity. To do this, charge the stun gun (if it is not fully charged), and then discharge it and recharge it. It takes 4-5 hours to fully charge. There is an opinion that Ni-MH batteries can only be charged after their full (100%) discharge. But in fact, a deep discharge of the battery is undesirable, because cells discharged to a voltage of 0.9 V and below, the usual charger will not be able to return to life. Do not place a fully charged stun gun on extra charging, since Ni-MH batteries are sensitive to overcharging. It can lead to thermal overclocking and failure. Batteries must be at room temperature before charging. The most effective charging at an ambient temperature of + 10 ° C to + 25 ° C. During storage, the Ni-MH battery is self-discharging. After a month at room temperature, the loss of capacity is 15-20%, but in the future losses are reduced to 5-10% per month. The self-discharge rate increases with increasing temperature. Recharge unused stun gun POLICE 1101 is recommended approximately once a month for 2-3 hours.

The period of storage of a charge by the accumulator stun gun – 8-10 months. However, the owner must carry out preventive checks of the battery condition approximately 1-2 times a month. The average time to reach the battery full charge – 4-5 hours. Experts do not recommend to reduce it or, on the contrary, significantly increase – this can lead to the device failure. If the stun gun POLICE 1101 battery is charged, then when the button is pressed, the owner usually observes a sufficiently bright electric discharge and a characteristic crackle. If, however, when you press the power button, you observe a dim discharge (or lack of it), it means that it’s time to put the stun gun on charge. You can not press the discharger button in any case, if the stun gun is connected to the network for charging purposes. Do not leave the appliance unattended if you have small children! Follow these simple rules, then the life of the flashlight stun gun POLICE 1101 will be maximum.

The discharge of stun gun leads to instantaneous convulsive contraction of the muscles and to disruption of the entire neuromuscular system in the area where it was applied. In this case, a person experiences severe pain and stress, continuing for some time after receiving the blow. Therefore, for more effective exposure, you should choose the area of ​​a large accumulation of nerve endings on large muscle groups – thighs, neck, chest, waist. The electric discharge goes on the shortest distance, so do not be afraid to use stun gun POLICE 1101 if the attacker grabs you. Stun gun POLICE 1101 can pierce layers of clothing up to 4 cm. However, in rainy or snowy weather, when a water film forms on the clothes, the breakdown will go along the water film – the shortest distance. In addition, the folds of clothing, especially in front and in a sitting position, create air bags, and air is a good dielectric; zone of damage will reach only a small part of the discharge. And if the thickness, taking into account the fold, exceeds the penetrating capacity of the stun gun POLICE 1101, the discharge will only pass between the electrodes. The strength of the impact and the effect achieved depend in many respects on the health and threshold of the attacker’s sensitivity. For one person, a prolonged discharge can be insignificant, and another one can throw a small blow from his feet. It is not recommended to use electric shock weapons on elderly people, and also to discharge stun guns in the head. It is strictly forbidden to use stun gun in relation to children, pregnant women, and people with a pacemaker.

Battle electrodes in this flashlight are hidden, which allows you to carry it open, like a normal flashlight,  without causing suspicion that this is a stun gun. It is suitable not only for men, but also for women who, by the nature of their work, are often forced to return home late. We ourselves did not directly test this flashlight on people, but according to the manufacturer’s specifications one should expect from the next action stun gun POLICE 1101.

A short discharge of about 0.25 seconds. frightens off the attacker, causes him to have a slight  muscle contraction and pain , which can discourage him from the desire for a second attack. A discharge of an average duration of 1-3 seconds. causes seizures , severe pain, disorientation in space for several minutes, which leads to a temporary loss of control by the attackers over the situation. Deaths when using stun gun POLICE 1101 is excluded! With a powerful discharge for 3-5 seconds. can be achieved  loss of consciousness  up to 30 minutes, which depends on the physique and individual characteristics of the attacker. Flashlight – stun gun POLICE 1101, certainly, the best in the ratio of price and quality, and you can buy it at a discount, in our online store, by clicking on the link (this text) .